Nürburgring Has a Record That Will Never Be Beaten

There's a reason why Nürburgring was nicknamed the "Green Hell". It is now the most well-known race track in the world, with a history of nearly a hundred years that saw just about everything: from spectacular speed records to horrible accidents and near bankruptcy. Nürburgring lap times have become a benchmark for many sports car manufacturers, and a good performance at the track makes work a lot easier for their marketing departments.

The Nürburgring race track was officially opened in 1927. Today is consists of two parts than can be used separately or connected together: the 20.832-kilometre Nordschleife ("North Loop") and the 5.148-kilometre GP-Strecke ("Grand Prix Course"). The length of the Nordschleife changed several times after various reconstructions, but the longest Nürburgring course was 28.2 kilometres long: before the changes in the 1970s, the 7.7-kilometre Südschleife ("South Loop") was used, which was connected with the Nordschleife for some races during the inter-war period to make up the Gesamtstrecke ("Whole Course"). During modernisation of the course in the 1970s, the Südschleife was abandoned, and the Grand Prix was built as an additional circuit. 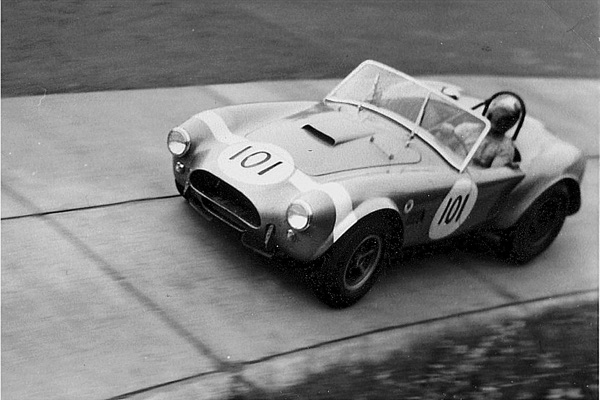 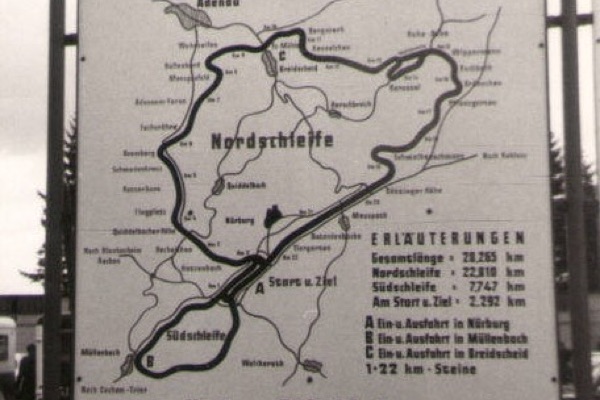 The most famous Nordschleife configuration was 22.81 kilometres long right up until 1966. Due to the length of the track and the unpredictable weather in the Nürburg region, drivers complained about the difficult weather conditions from day one: it wasn't uncommon for there to be rain at one end of the track while the other side was dry and sunny. The 10-minute barrier was only broken on the Nordschleife in 1936 – this was done by Bernd Rosemeyer with an Auto Union Type C during the German Grand Prix.

The track stopped being used in 1939 due to the war, and international racing only resumed 1951. The speed records set by Germans during the inter-war period were not broken until 1956, when single-seater Grand Prix cars were already able to do a Nordschleife lap in about 9 minutes. However, this mark was forgotten in 1961 – the first car to break the 9-minute barrier was a Ferrari 156 with Phil Hill at the wheel. 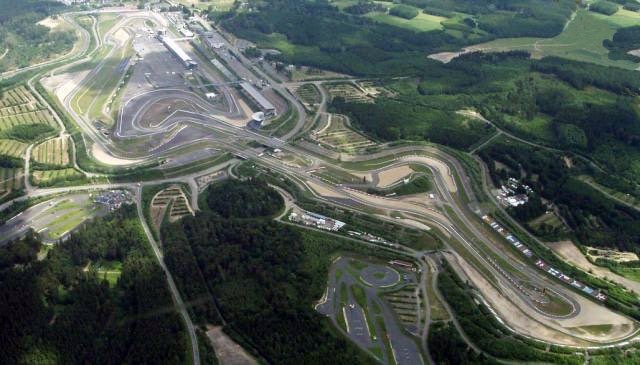 In 1967, the Nordschleife was extended by 25 metres to 22.835 kilometres. This was due to a chicane being added in order to reduce speeds going into the start/finish straight and the pit lane. Lap times were not really affected, as the automotive progress that year was huge – especially in terms of aerodynamics. Thank you, Lotus and Colin Chapman, for showing that power isn't the only thing that makes a car fast. Consequently, Chris Amon already dipped under the 8-minute mark with a Ferrari 312 in 1968.

In 1971, the Nordschleife underwent serious reconstruction. The entire track was repaved, removing many of the bumps, and safety barriers were installed in dangerous areas. This made the track even faster: Jackie Ickx came close to the 7-minute barrier in 1972 with a Ferrari 312B2, and Niki Lauda was the first to break it in 1974 with a Ferrari 312B3. 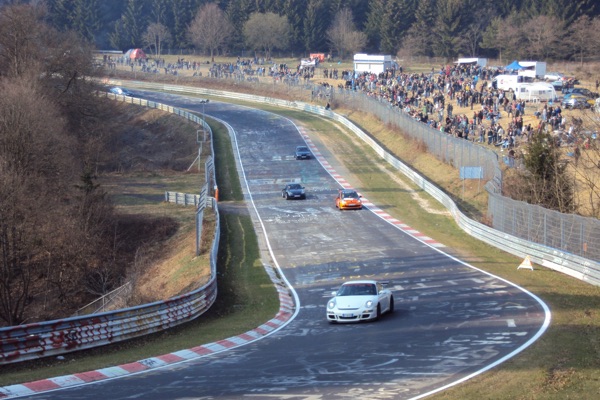 However, the track was dangerous. Too dangerous for F1 races, which withdrew from the Nordschleife after 1976, and for the motorcycle GP, which withdrew after 1980. Yet another modernisation plan was drawn up, after which the Nordschleife was shortened to 20.832 kilometres (its current length), and a new, 4.5-kilometre Grand Prix track was built alongside of it (that was extended to 5.1 kilometres after being reconstructed in 2001). 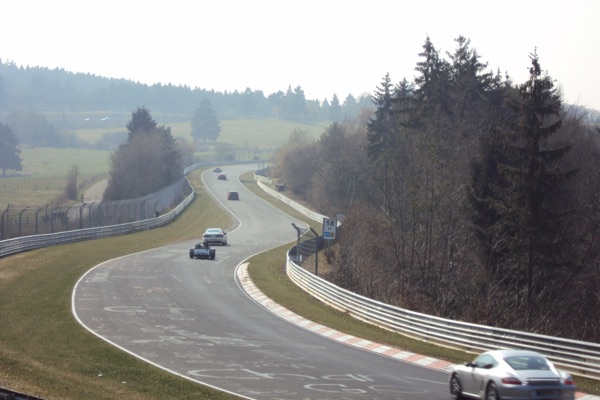 Cars were getting faster and faster, and the shorter circuit allowed Stefan Bellof to come very close to the 6-minute barrier in 1983 with a Porsche 956. But... it was never broken, because after the Grand Prix track was opened, the Nordschleife circuit was used mainly for touring car racing, while the formula cars moved to the new short track.

An interesting thing happened in 2007. While doing a few demonstration laps at Nürburgring in a BMW Sauber F1.06 Formula One car, Nick Heidfeld – according to some media –covered the Nordschleife in 5:57, going under 6 minutes for the first time in history. Given, BMW didn't own up to it – Nick's car was fitted with hard tyres and its top speed was limited to 275 km/h, so BMW declared a lap time of over 7 minutes. On the other hand, back in 2006, F1 Racing magazine published estimations made by BMW engineers that one of the fasted F1 cars of the time could lap the Nordschleife in 5:15.8 with an average speed of 237 km/h, but nobody dared to prove it in reality. 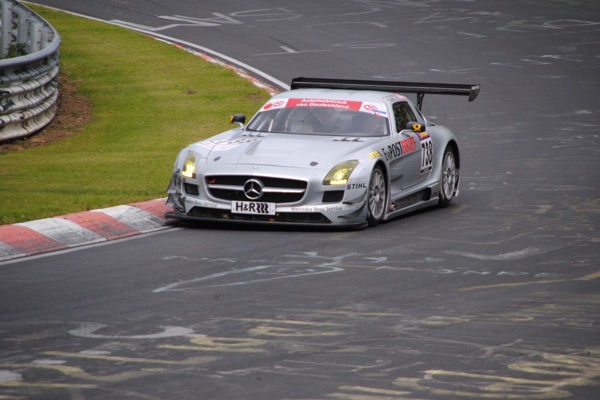 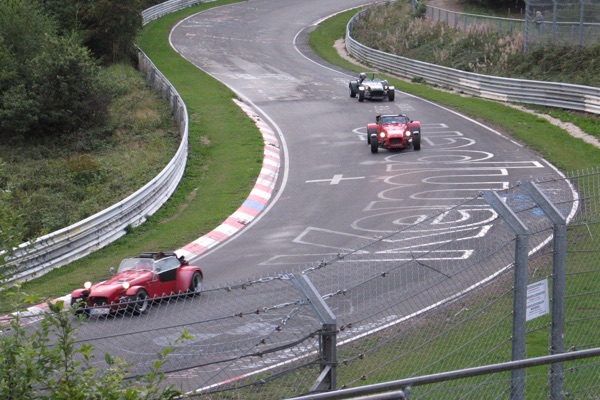 Nürburgring Nordschleife is often open to the public
© Wikimedia Commons

These days, the speed records at the Nordschleife, which Sir Jackie Stewart famously called the "Green Hell", hover around 7 minutes – breaking this barrier is a point of honour for any manufacturer. Among factory cars, the electric NextEV Nio EP9 has the best time at the Nordschleife circuit – 6:45.9. The Radical SR8, the Lamborghini Huracan Performante, the Porsche 918 Spyder, the Lamborghini Aventador LP 750-4 Supereloce, and several other models can break 7 minutes on the Nordschleife, but they are still a long way off Stefan Bellof's 6:11.13. And this record may never be broken – formula cars don't drive the Nordschleife, and it is unlikely that everyday cars, with their safety and environmental requirements, will ever be able to reach the speed that the sports models of the 1980s did.