If run of the mill Aston Martins, Ferraris and Bentleys are not quite exclusive and airplane is not enough for you, Spyker might pique your interest. This Dutch low-volume manufacturer offers stunning luxury sports cars that look the part from pretty much everything else on offer. Brace yourselves for a visual feast of polished aluminum, fine leather and gorgeous gauges.

Spyker was originally established in 1880 and started building horse drawn carriages, one of which is still used by the Dutch Royalty. At the turn of the century their focus shifted towards the motorized carriages, a.k.a. cars. The Dutchmen were quite good at it, for instance, Spyker 14/18 PK won the grueling Peking to Paris rally in 1907. In 1914 the company merged with an airplane manufacturer and began producing fighter planes for WWI. After the war, Spyker carried on producing luxury and sports cars for another few years, until going bankrupt in 1925.

The brand was off the map until 2000, when a new business venture started using the name for their luxury sports cars. The first new Spyker, C8 Spyder, made its debut in Birmingham Motor Show. Spyker’s heritage was reflected in aero-space inspired styling cues all around the car. Of course, it is quite typical of car designers to turn to planes for inspiration, examples like that range from SAAB 900 to Lamborghini Aventador. This tested recipe resulted in a stunning design, which was complemented by plentiful quality leather and polished aluminum. Finally, the car’s interior was finished with Spyker’s signature exposed gear linkage. 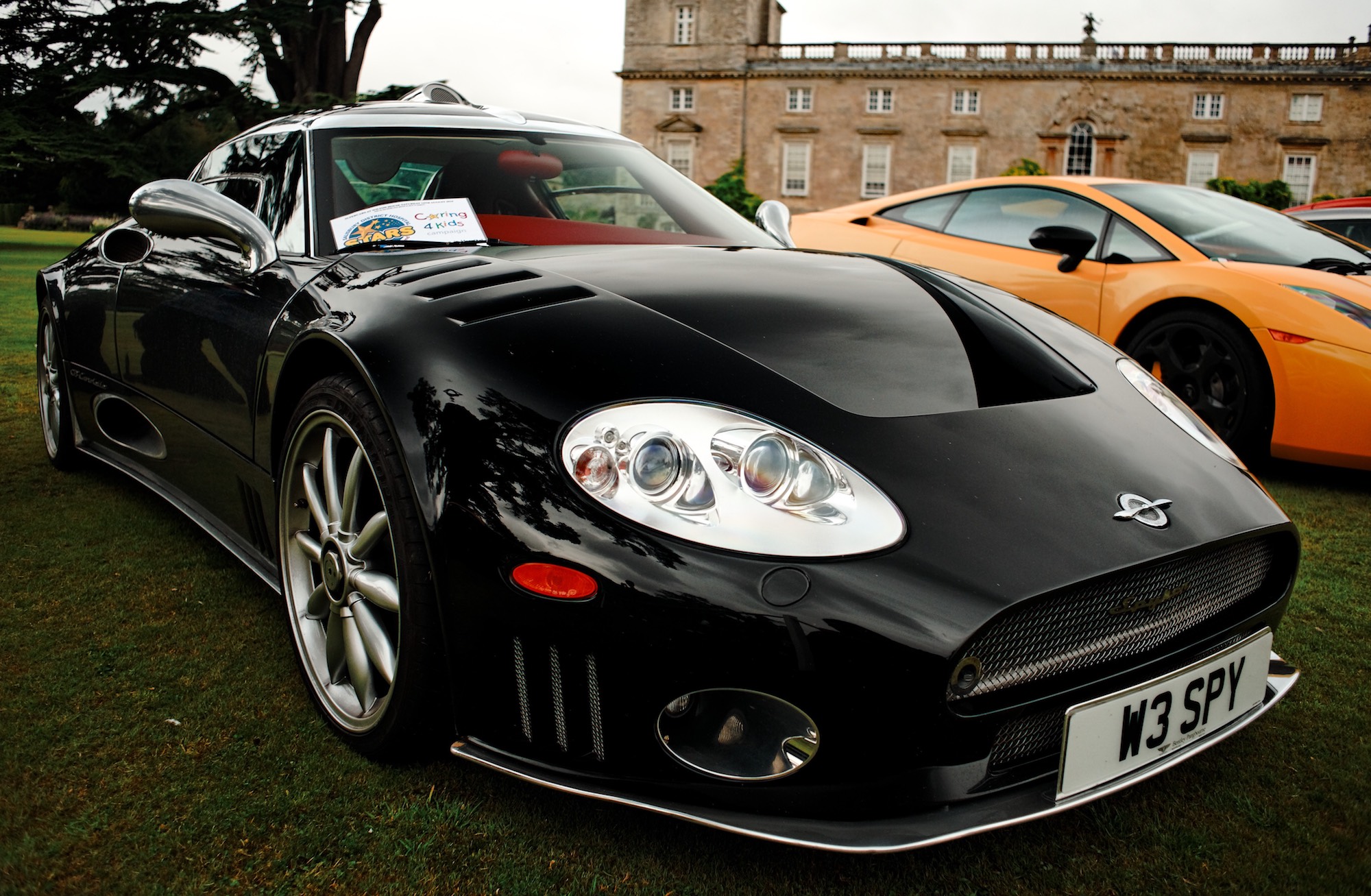 C8 Spyder and all other C8s that followed are propelled by a mid-mounted modified version of Audi’s 4.2 V8, an incredible engine to begin with, driving the rear wheels. The Spyder was soon followed up by C8 Laviolette which had a fixed transparent roof. In 2006 their car range was expanded with a 6.0 W12 powered C12 La Turbie and a year later it was rebodied by Zagato and sold as C12 Zagato.

The company was not satisfied with just building road cars and entered endurance racing with a purpose built C8 Double 12R. Developed on extended C8 platform, it was intended specifically for 24 hours of Le Mans. This car spawned a road-going homologation version with an equally enormous name C8 Double 12S which could go up to whopping 345 km/h. 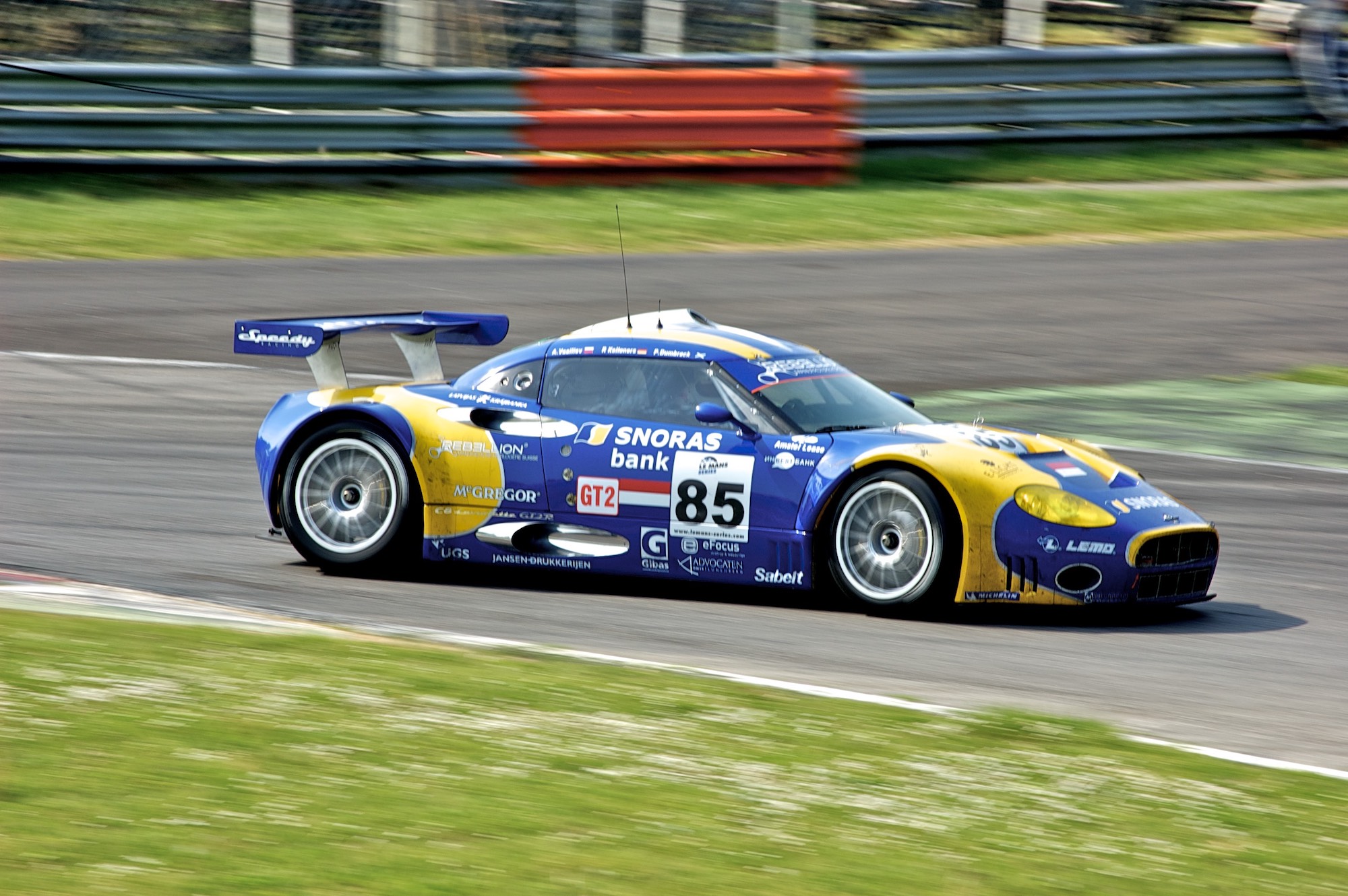 Spyker’s motorsport ventures did not end there. In 2006 the company even had its own F1 team. Sadly, due to failing crash tests they have missed the start of the season and their later efforts were not too successful either – the team only managed to score 1 point in the whole season. GT racing worked far better for Spyker, in 2009 they even finished 5th in class in 24 hours of Le Mans with Spyker C8 Laviolette GT2R. 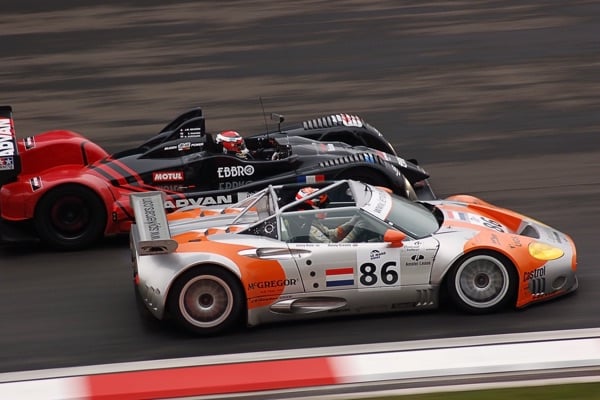 The company has heavily engaged in endurance racing in the past
© H. Turkhan, Flickr 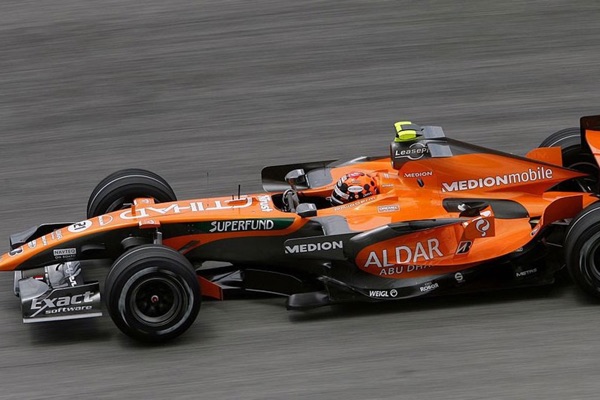 Another fall, another rise

In 2009, Spyker acquired SAAB, another airplane-inspired company. The plan was to turn the struggling manufacturer around and bring it back to its former glory. This plan for SAAB failed, dragging Spyker down along with it. The Dutch manufacturer had to cut its losses, get rid of SAAB and restructure after declaring bankruptcy in 2014. Then the company disappeared for a couple of years just to make a comeback with a C8 Preliator, a third generation of their C8 supercar. 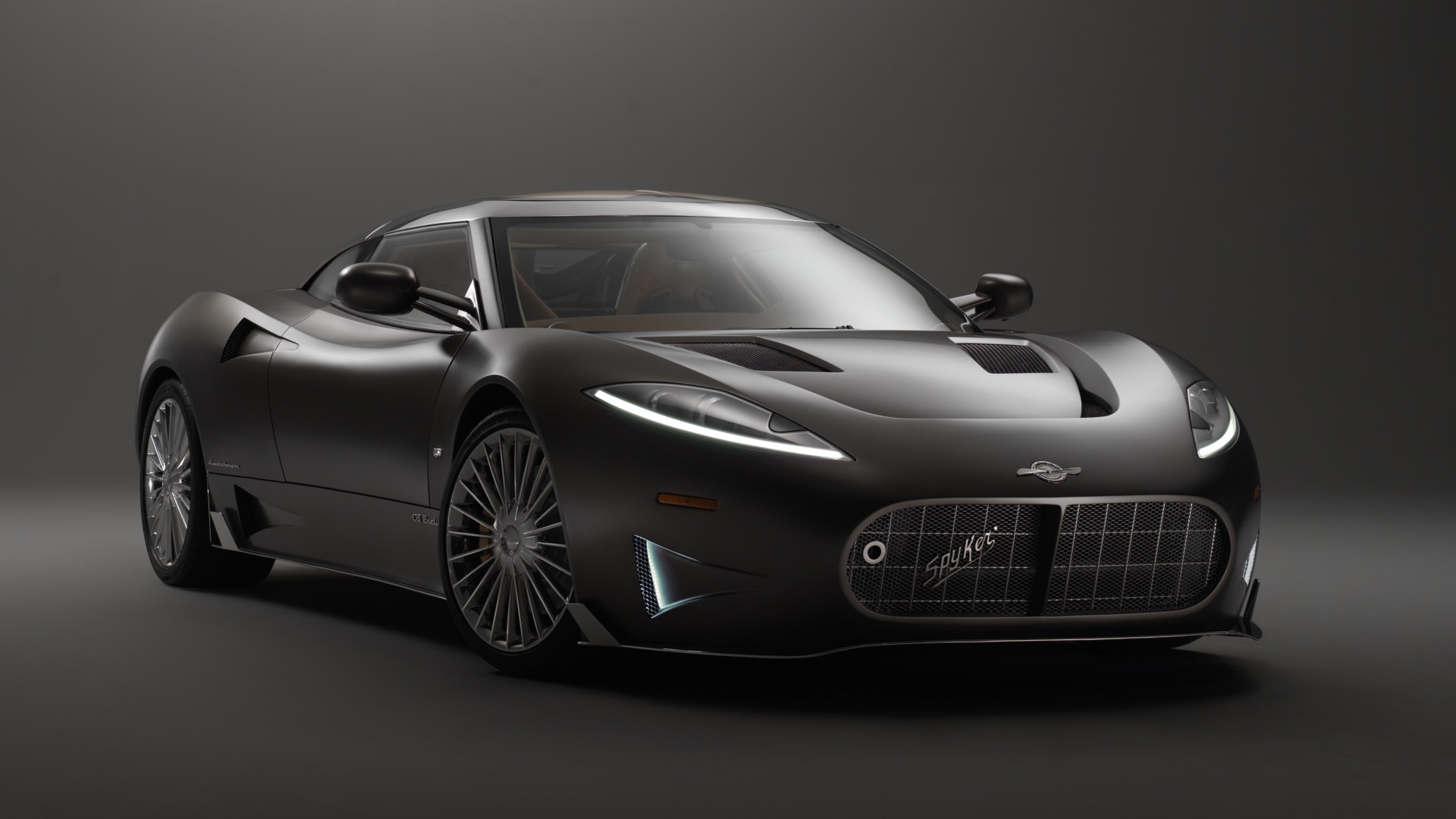 We are glad Spyker managed to recover after their financial hardship – the car maker truly brings some variety into the automotive ecosystem. When it comes to craftsmanship and attention to detail, Pagani is virtually the only other manufacturer that can match Spyker. Dutch company tries to deliver the best tactile sensation possible, all of their surfaces are made from high quality materials, solid feedback of all inputs is their top priority. One starts a Spyker by flicking a fighter jet style switch and changes gears with the aforementioned exposed 6-speed gearbox linkage. Everything around those switches and dials is covered in top quality bull leather in stitching of client’s choice. Think of Spyker as a sportier and less tacky Rolls Royce competitor. On top of that, Spykers tend to age better than most luxury cars, at least in our opinion. The original C8 Spyder looks far less outdated, both inside and out, than comparable DB7s and Ferrari 360s from the same era. 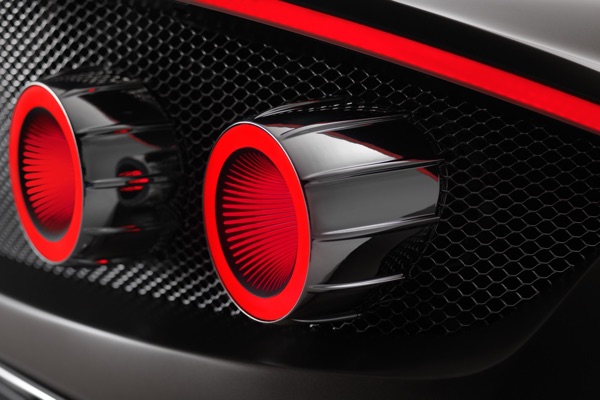 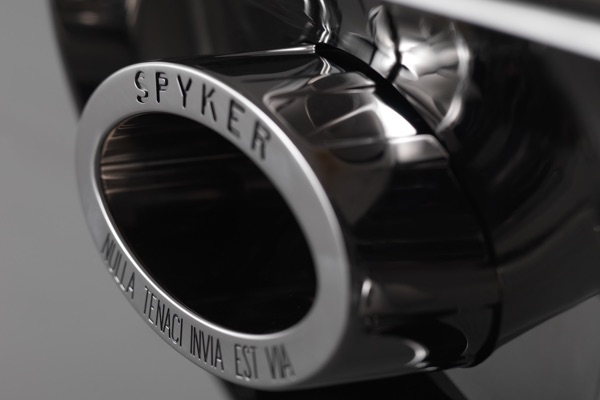 Company’s motto means “For the tenacious, no road is impassable”, and it decorates this exhaust tip
© Spyker Cars 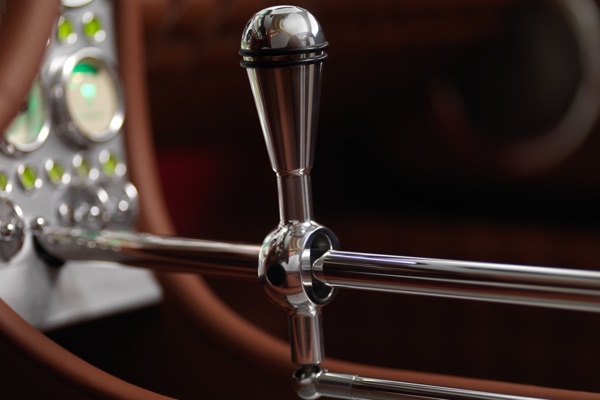 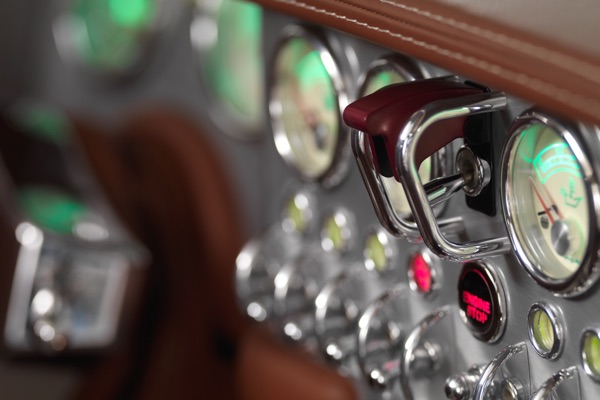 They are also more exclusive than Rolls Royce. Only around 300 of contemporary Spykers have been built to date. To increase the feeling of belonging to a special club, the Spyker owners have their own internet Spyker forum which cannot be accessed by mere mortals. For instance, there is only going to be 50 of C8 Preliators made in the end. These 520 hp, 322 km/h cars will sell for at least $354,900 which is comparable to Ferrari 812 Superfast price. Even when Ferrari can offer you more performance, Spyker will definitely trump it in terms of exclusivity.